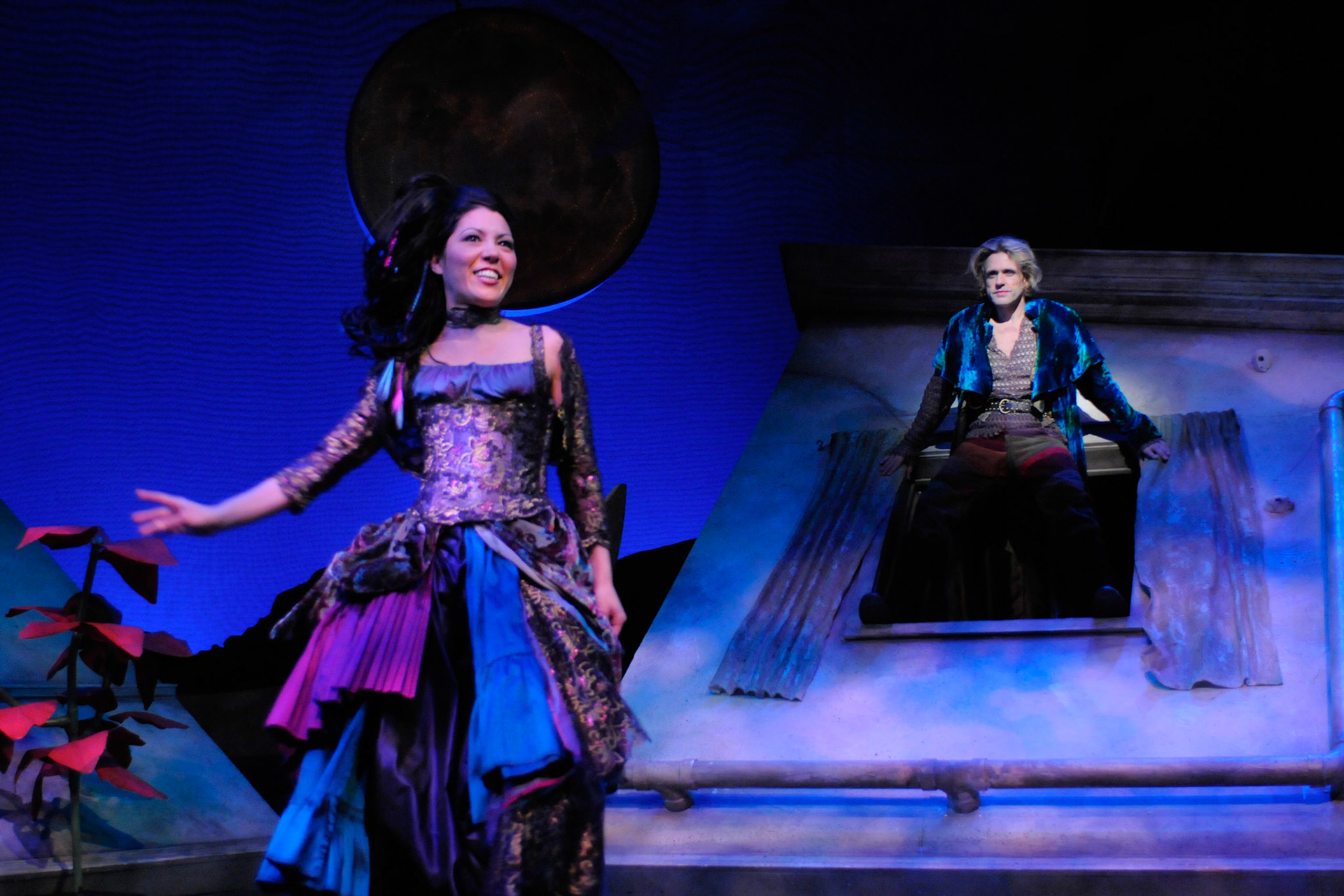 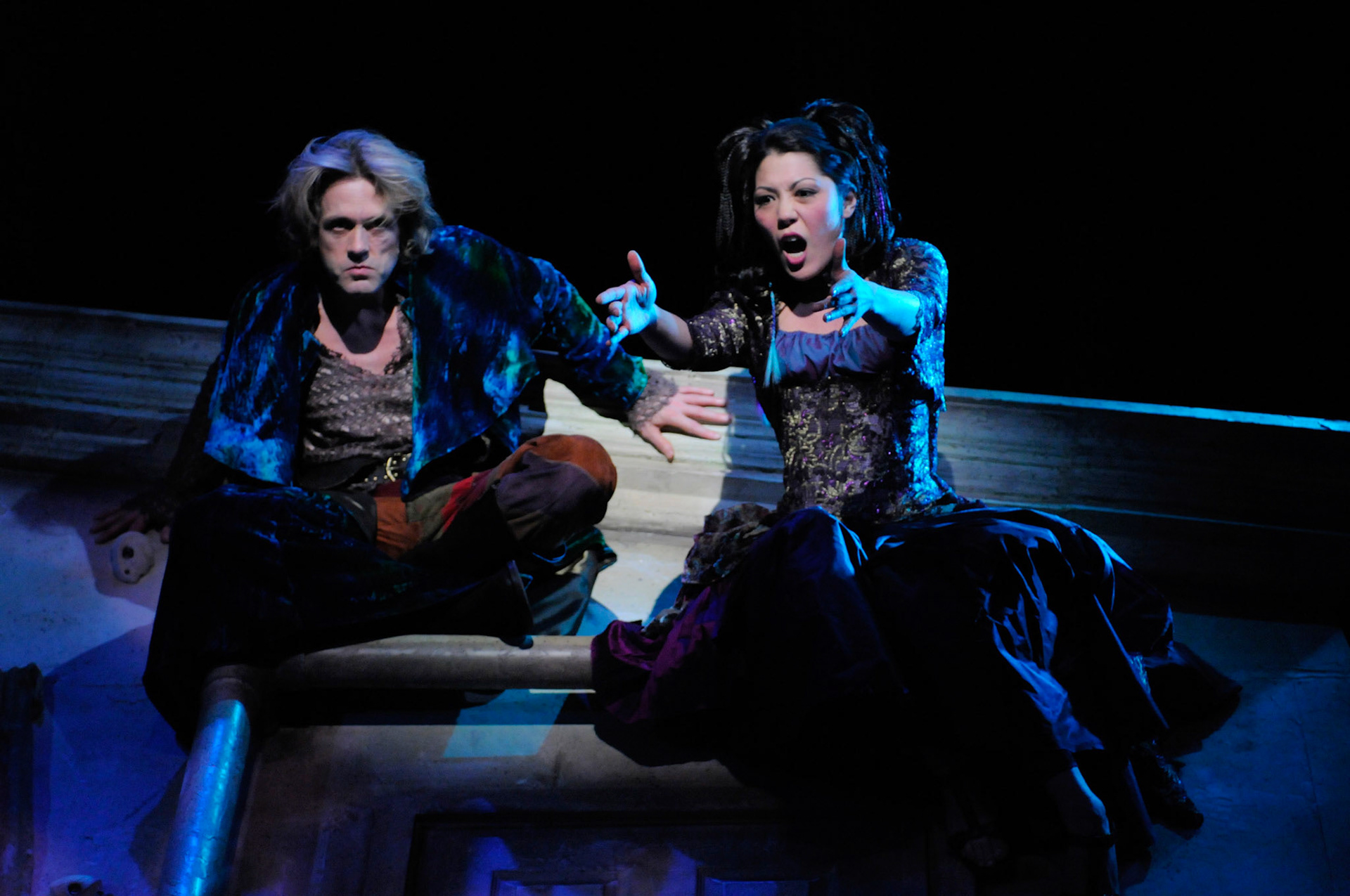 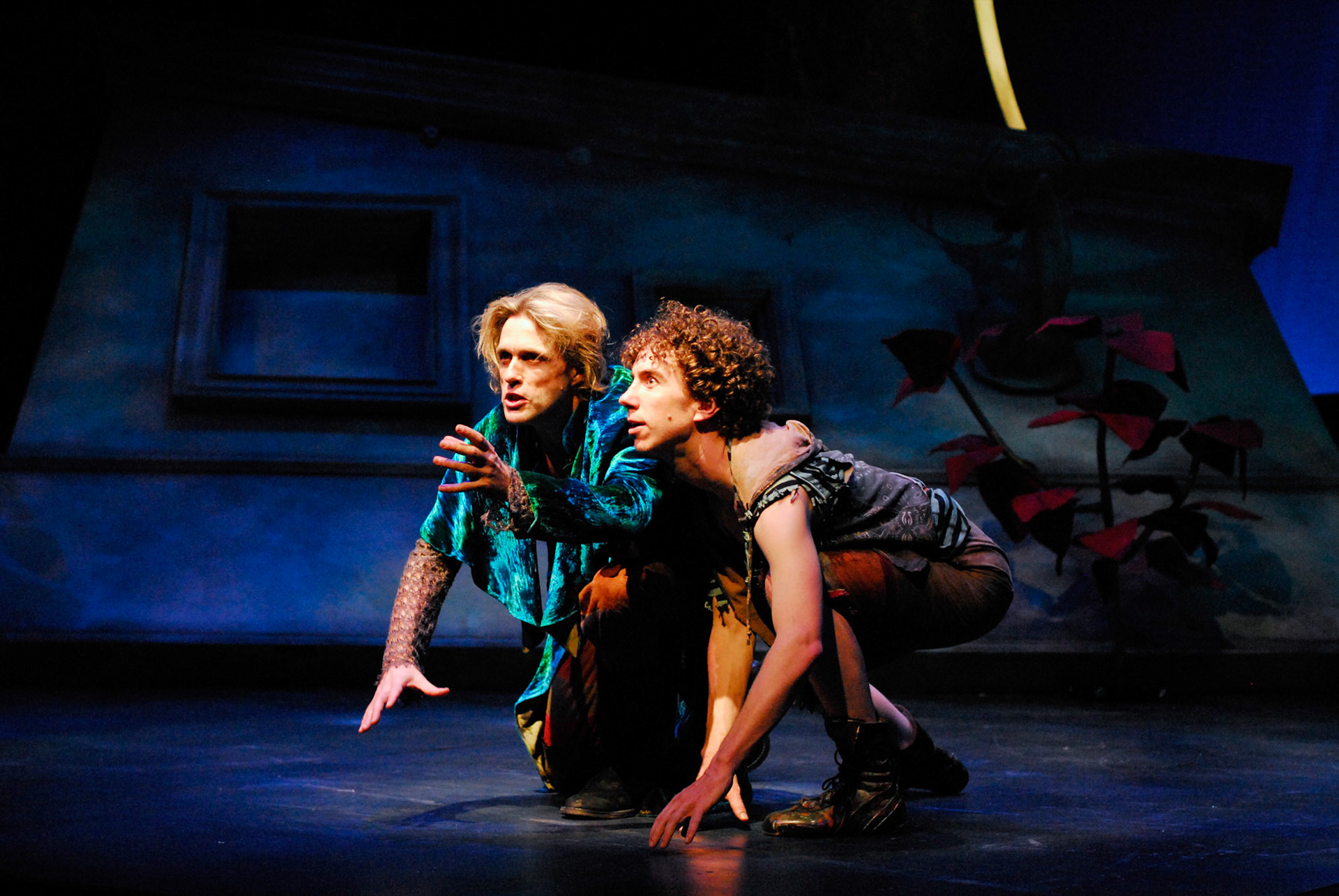 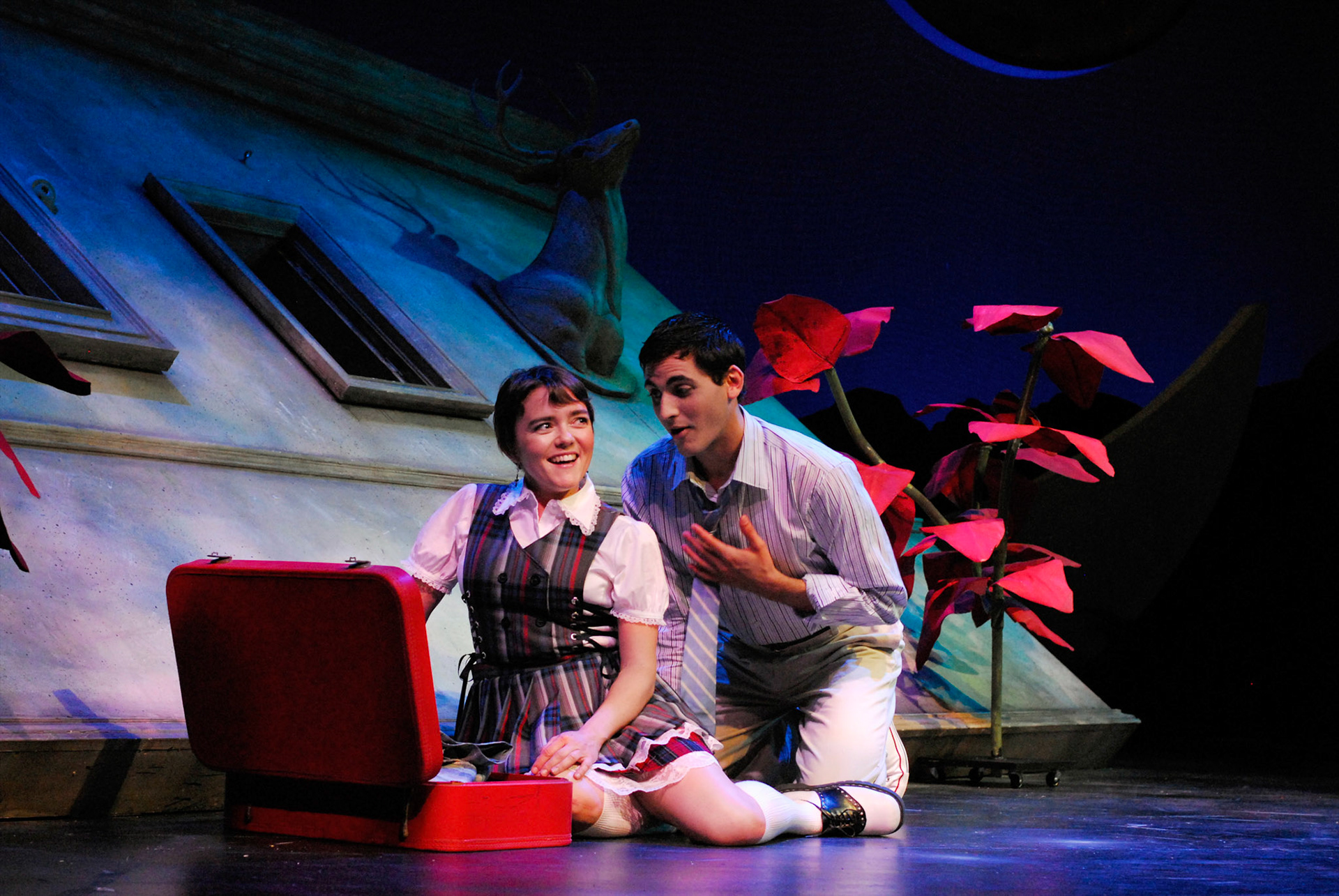 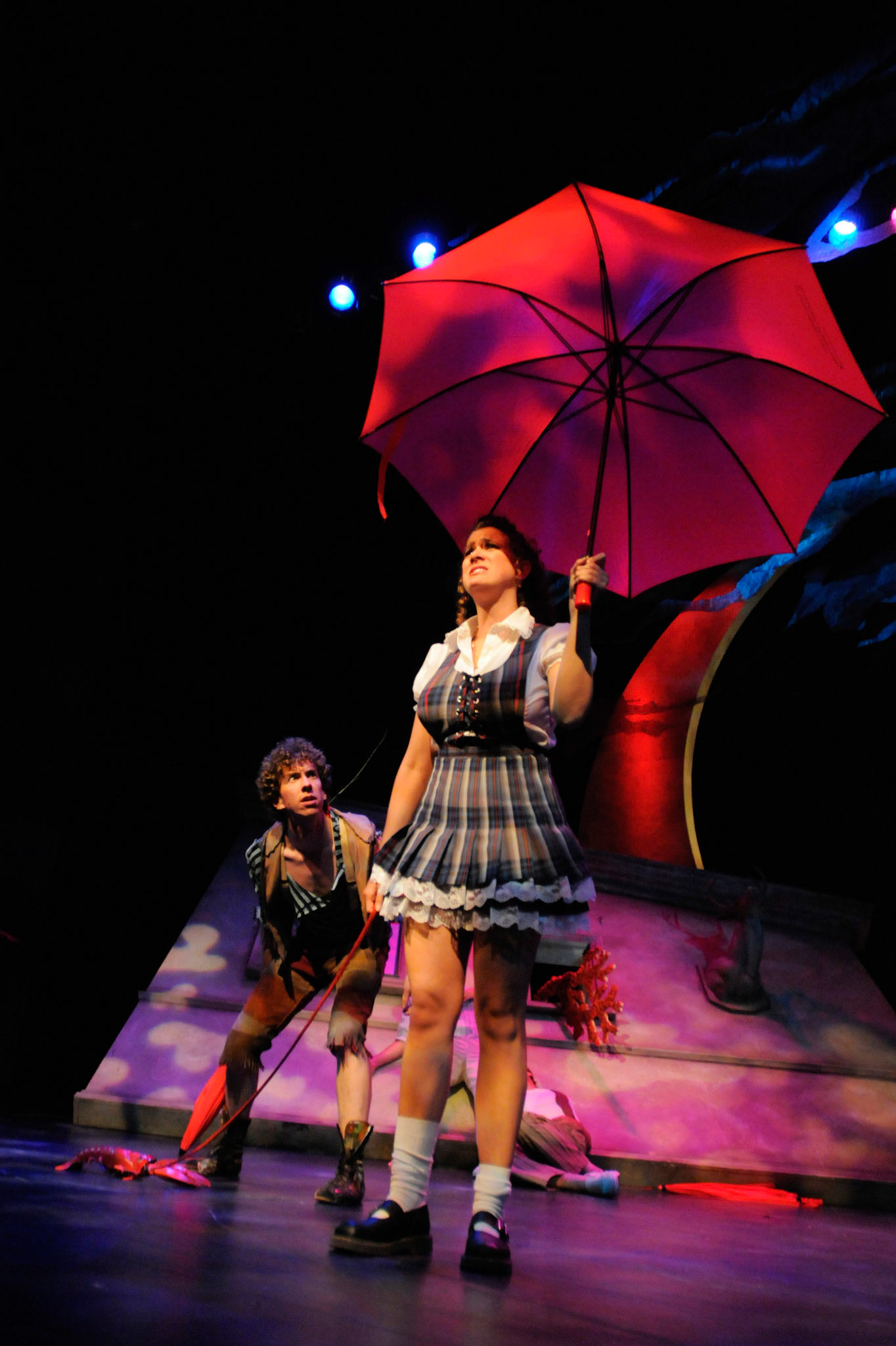 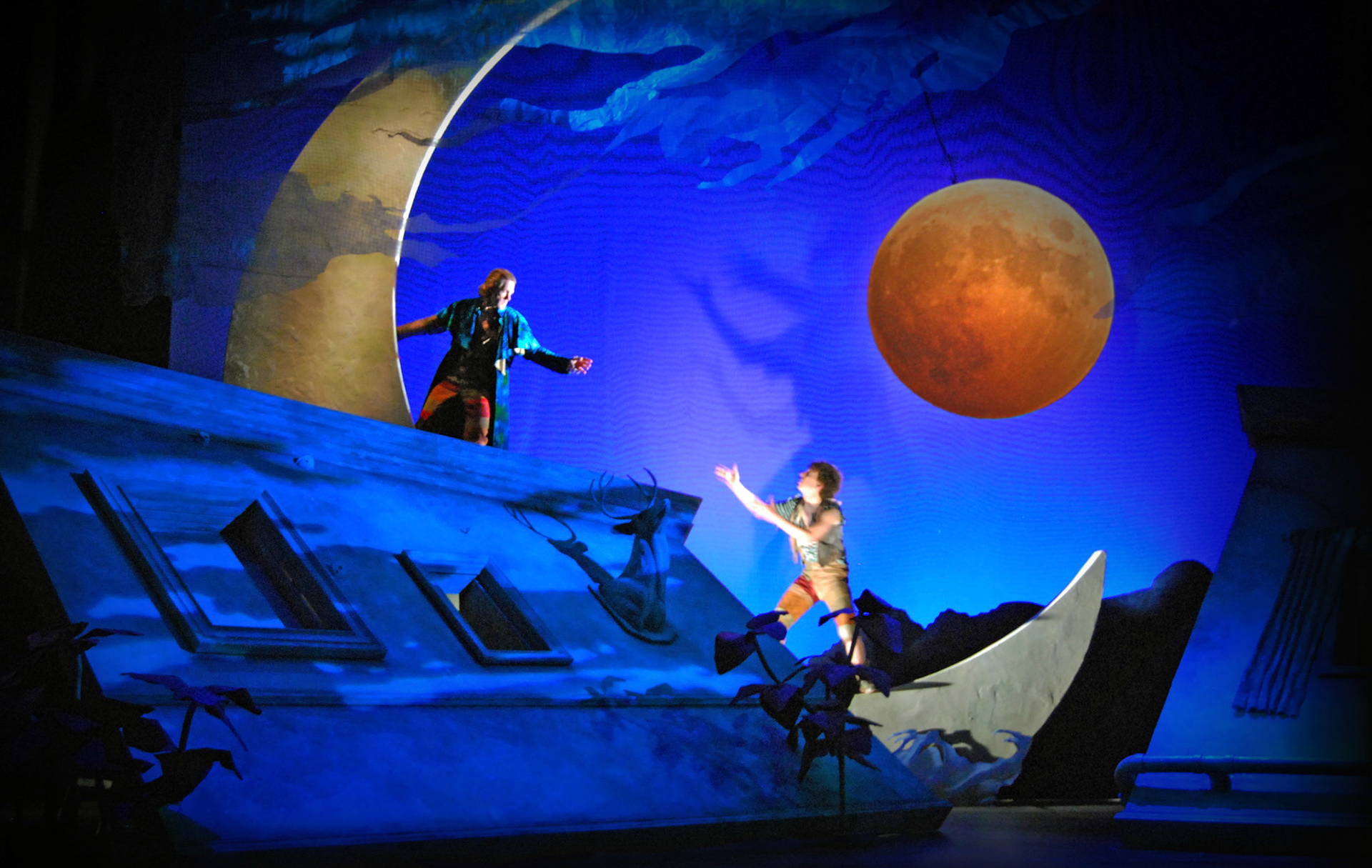 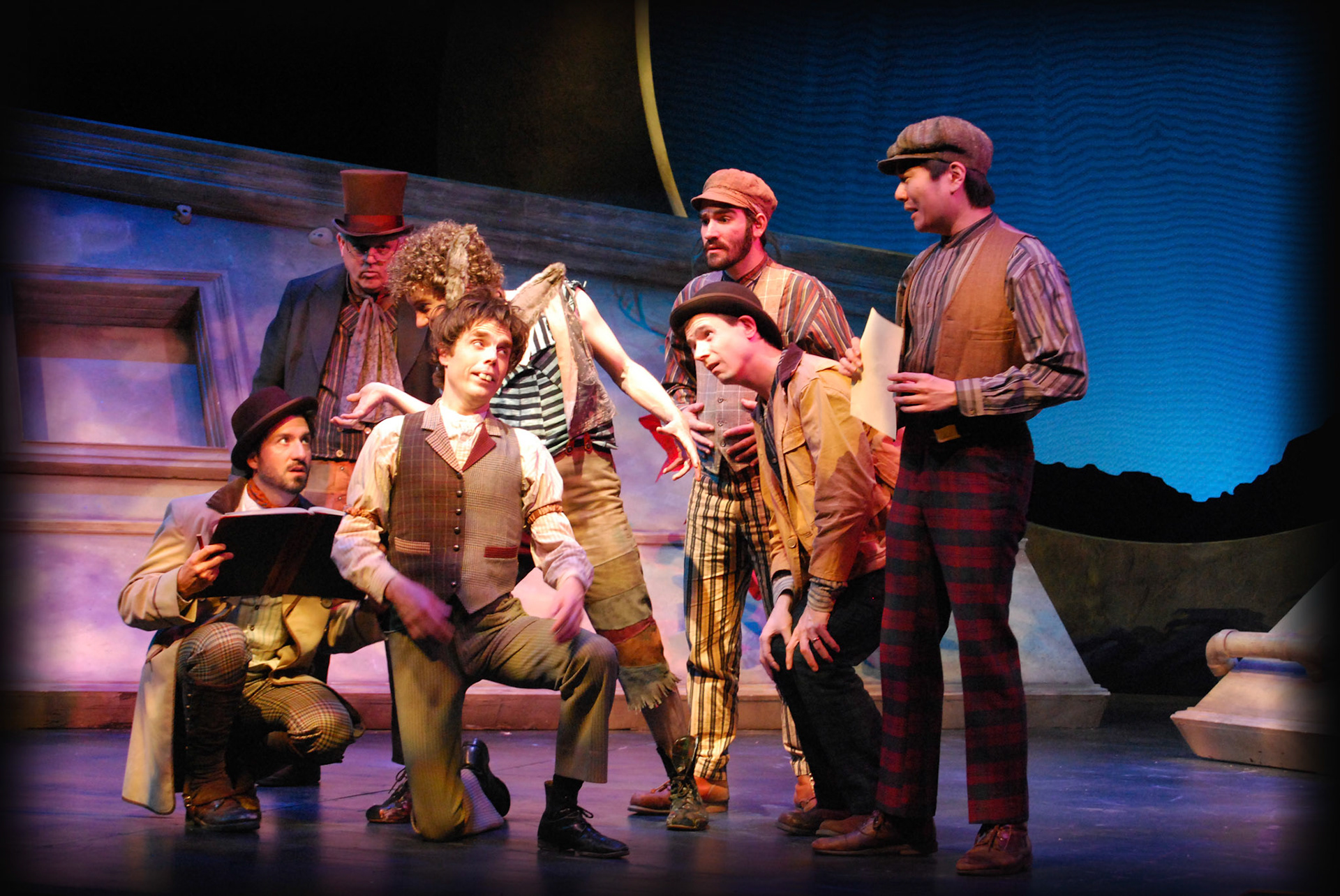 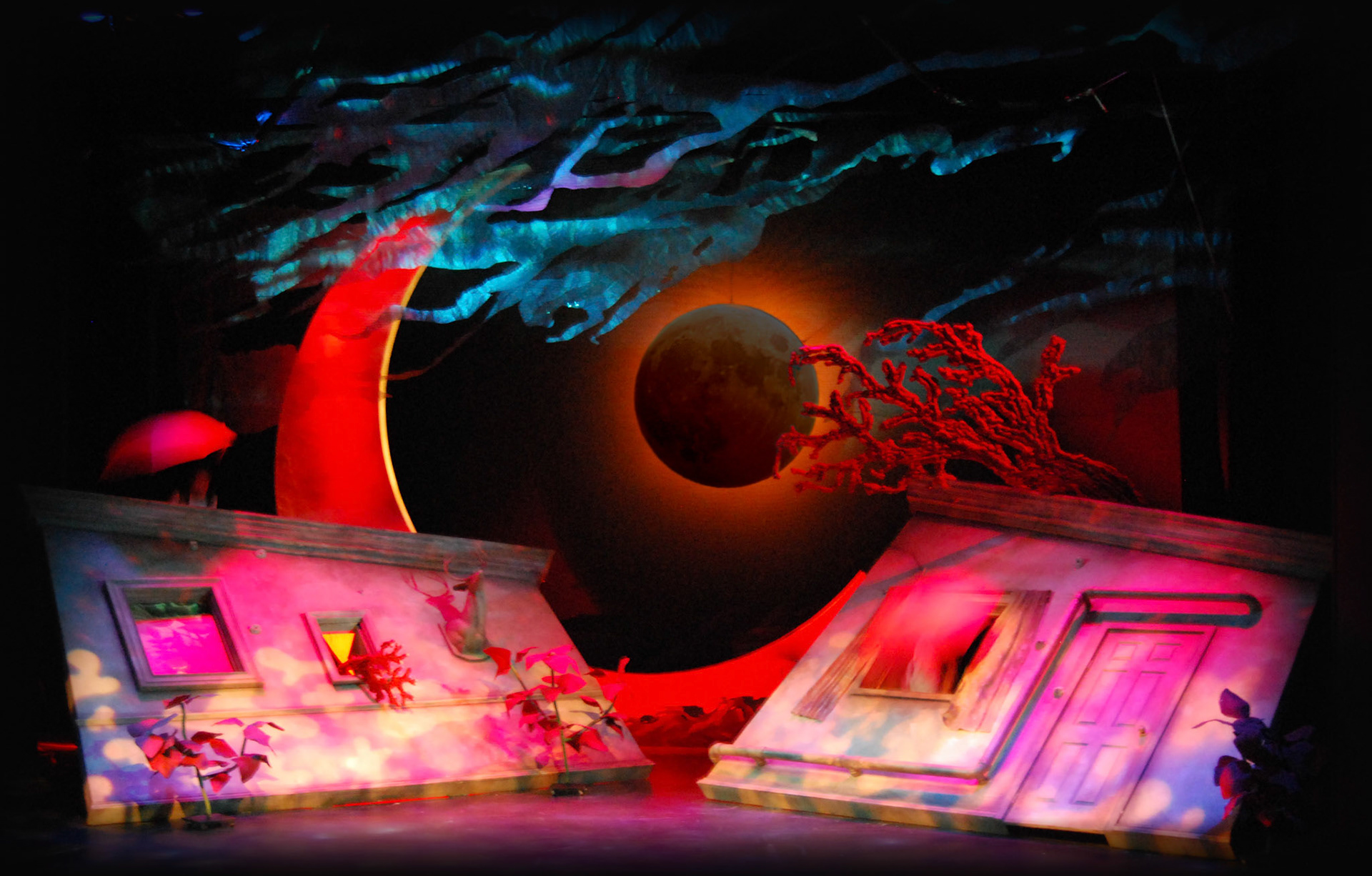 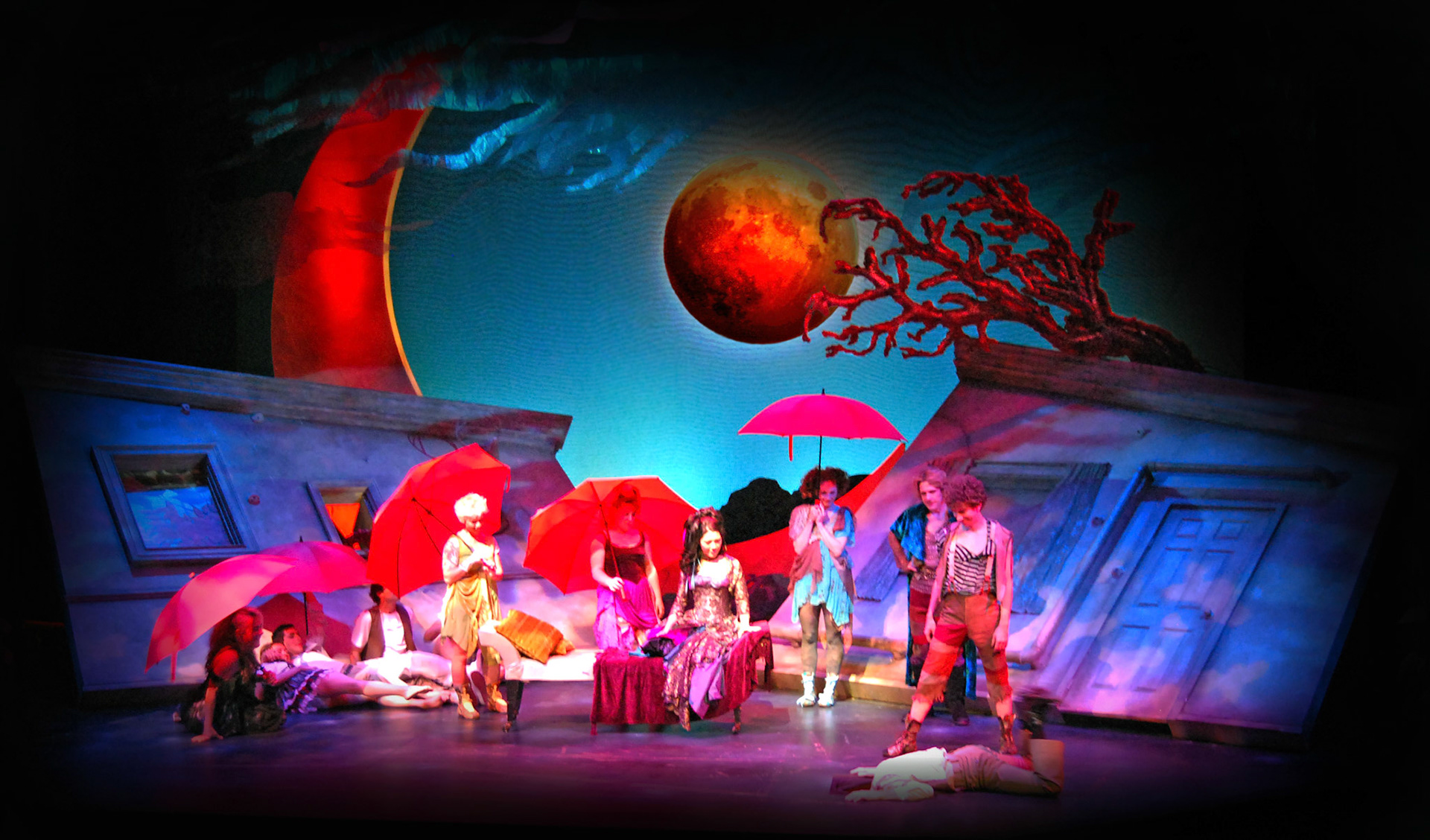 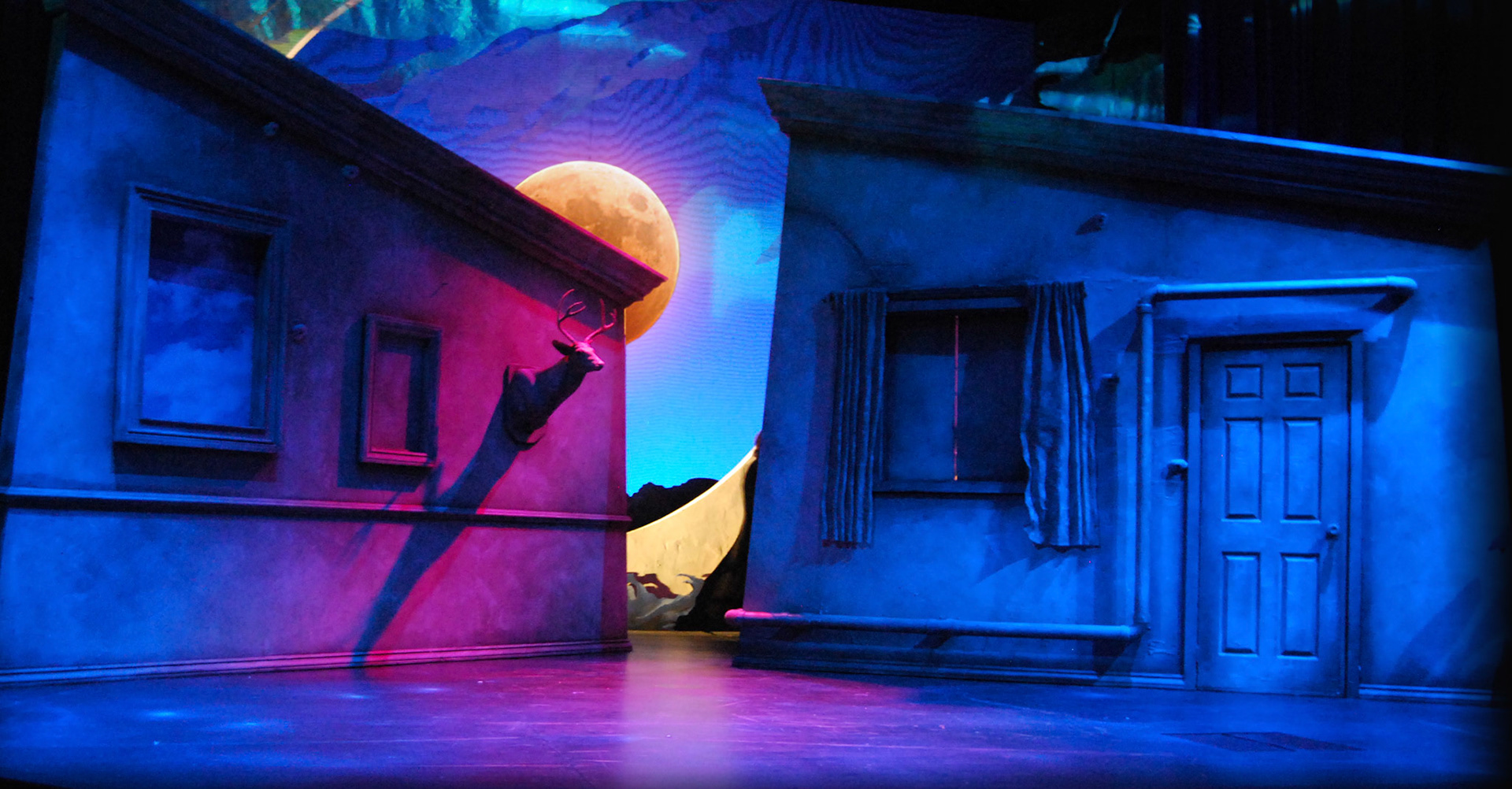 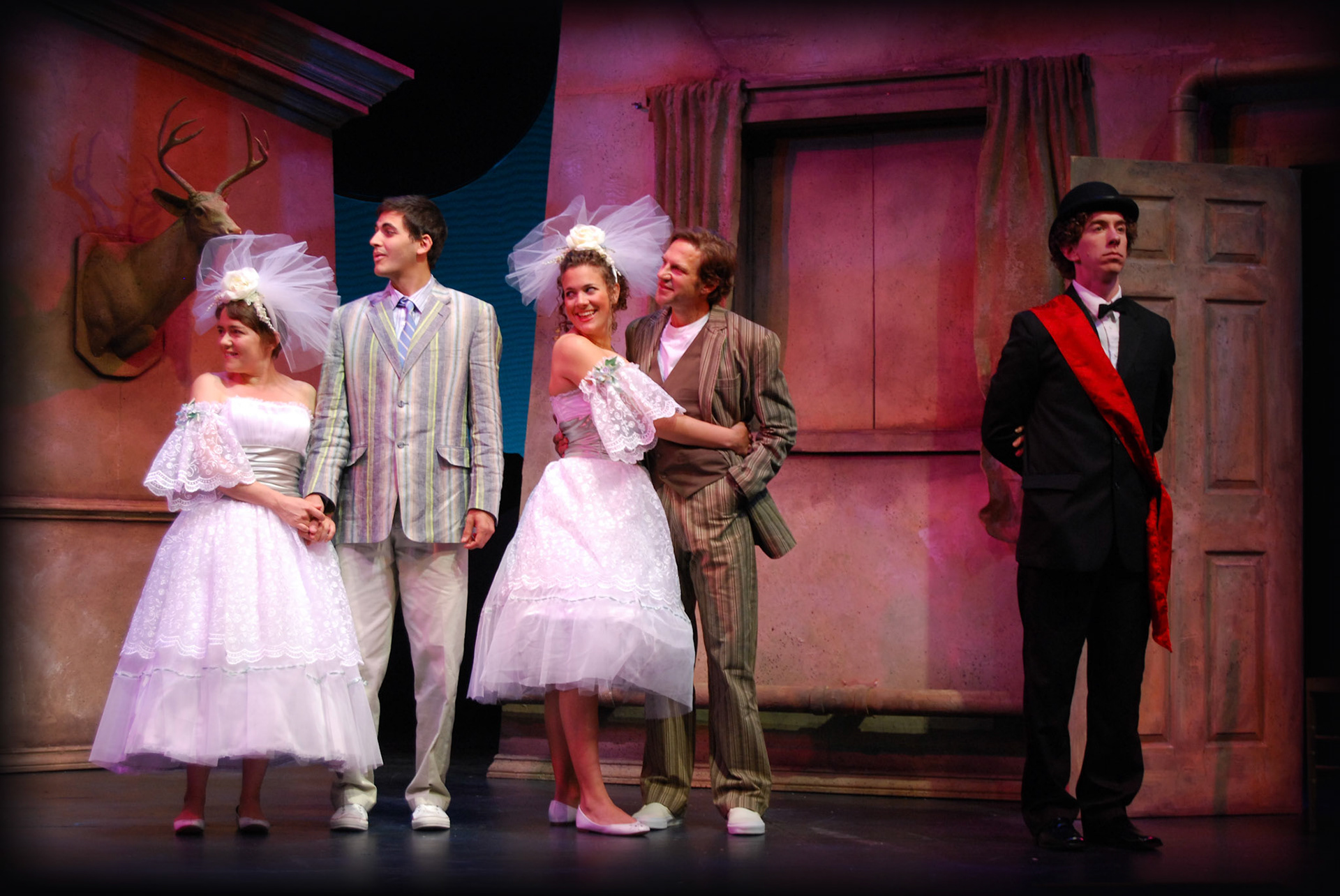 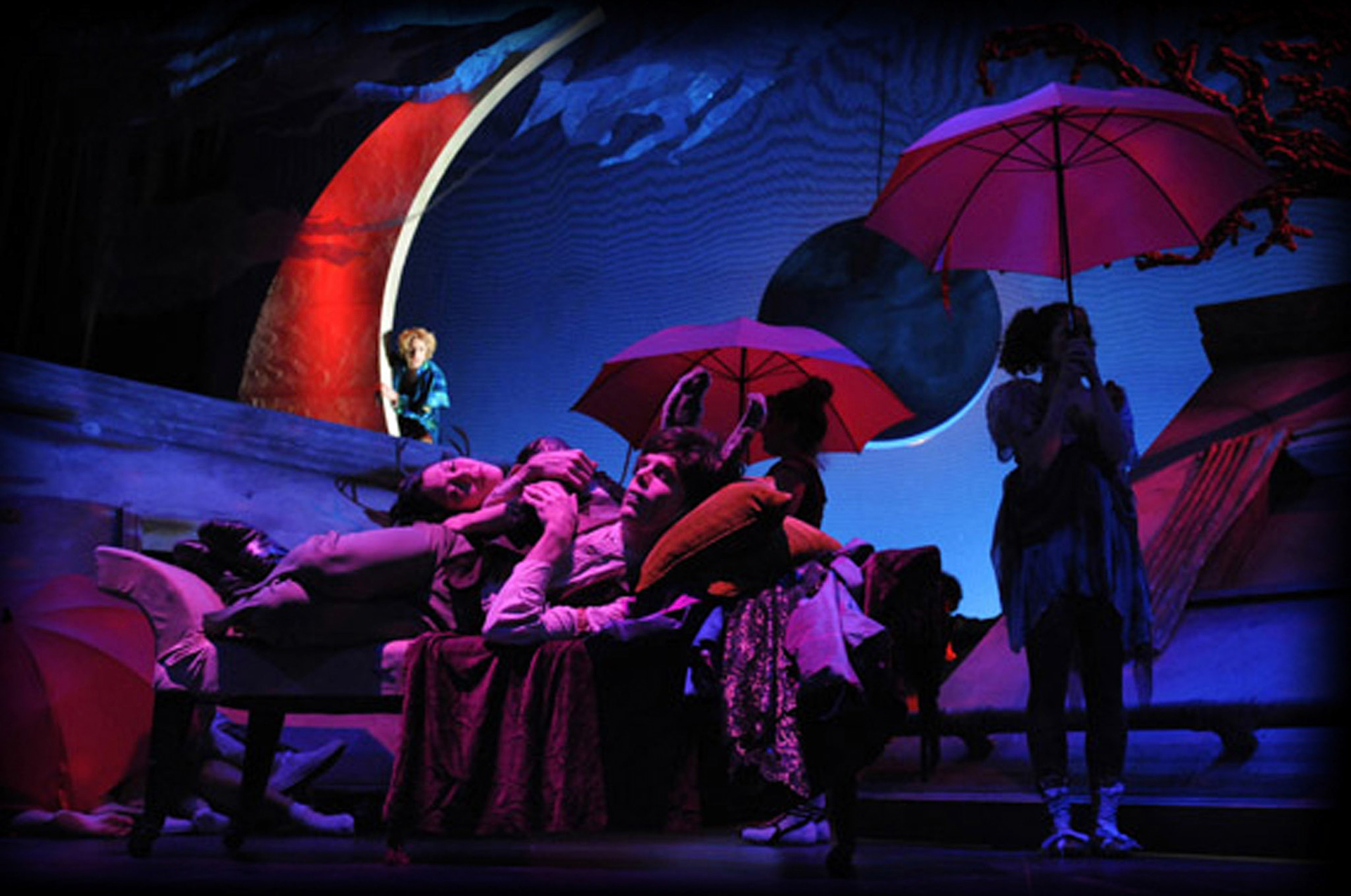 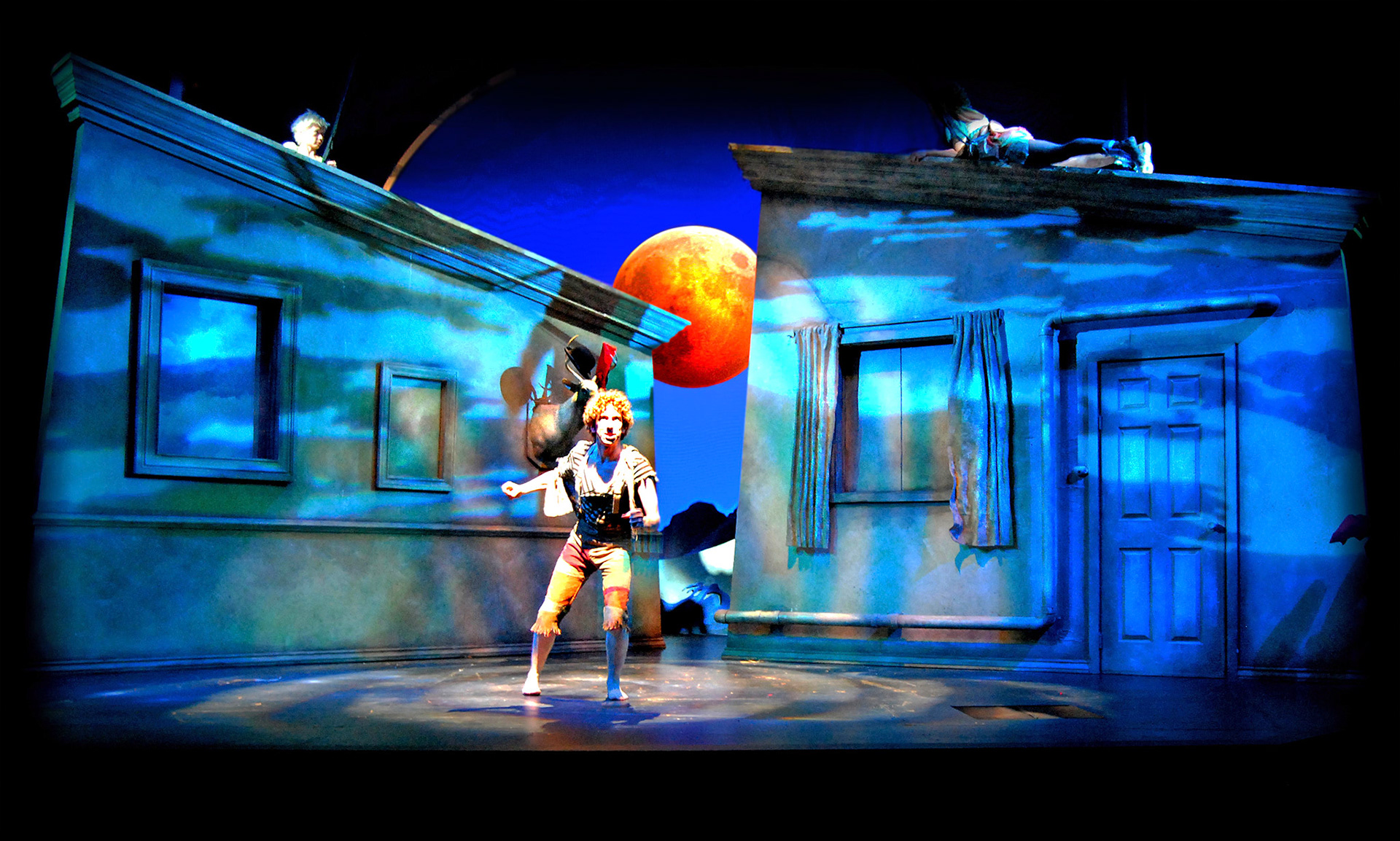 Directed By Michael Butler~
Scenic Design By Kim A. Tolman^
Lighting Design By Kurt Landisman^
Costume Design By B. Modern^
Choreography By Krissy Keefer
Score By Marc Ream
Michael A. Berg: Starveling
Darren Bridgett*: Demetrius
Sarah Bush: Moth
Lizzie Calogero*: Hermia
Jeff Draper: Snout
Lena Gatchalian: Mustardseed
Richard Louis James: Egeus
Kalli Jonsson: Oberon/Theseus
Carie Kawa*: Titania/Hippollyta
Frederika Keefer: Peaseblossom
Krissy Keefer: Cobweb
Arthur Jason King: Francis Flute
Mick Mize: Puck/Philostrate
Mark Anderson Phillips*: Bottom
Joel Roster: Snug
Kimberly B. Valmore: Peaseblossom
Liam Vincent*: Peter Quince
Adam Yazbeck*: Lysander
Elise Youssef: Helena
*Member of Actor's Equity Association
^Member of USA 829
~Member of Society of Stage Directors and Choreographers
The walls of the A Midsummer Night's Dream set featured a pneumatic piston system that enabled the walls to be lowered from 90 degrees to a slanted angle. The rigid upright walls were for the everyday world of Athens, while the slanted walls represented the wild, overgrown night time chaos of the Forest. Director Michael Butler wished to stage the classic play in a non-traditional way. Butler says, « Midsummer has two distinct worlds: that of the Court with all its rules and constraints, and the forest, which is anarchic, mischievous, erotic. I thought of the play as a gleeful and unruly rebellion of the imagination against all those forces that tell us what we're supposed to do. I wanted also to play with strange intersections of dream world with real world, like vines invading our hair while we sleep. So rather than keep the two worlds separate, Kim and I wanted the world of the Court to be taken over and transformed by the forest, much the way it might happen in a dream where the familiar can suddenly alter in strange ways. »

This Is How It Goes

La bohème
↑Back to Top